The Fuatsken (空気拳) or Air Pressure Fist is a Ninku technique shown in the Ninku series. While the ball itself is often used in other Ninku techniques to enhance the attack power, the ball is instead used as a direct attack and has certain variations. It is an Air style Ninku technique and is Fuusuke's signature attack. In the English movie dub, the move is called the Air Stinger Attack.

Like most Ninku techniques, the Fuatsken is primarily used by the first division of the Ninku unit. The user preforms two hand gestures before bringing their hands together forming a glowing aerial sphere. After formation, the user grabs the ball and utilizes the sphere for a certain use, but is often used for striking their opponent. The Fuatsken is powerful enough to smash through hard metal, break bones and rupture internal organs upon impact. In the anime, Fuusuke first used the technique in his battle with Lee, and its first appearance in the manga he used in his battle with Koushou.

Fuusuke has used and mastered the technique to full effect and is often his finishing maneuver when in battle. during his battle with the Feng Shui trio, Fuusuke used the move as a barrier to not only shield all three of their strongest attacks, but also knocked them back with enough force to send them smashing into rock. During Second Stage, Fuusuke was shown being capable of forming the ball without any hand formations.

Fuusuke forming the attack in the manga.

The formation in the anime. 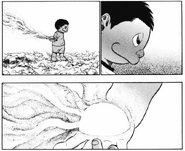 Fuusuke forming the technique with one hand in Second Stage. 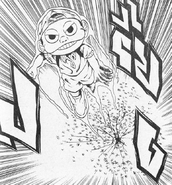 Retrieved from "https://ninku.fandom.com/wiki/Fuatsken?oldid=4204"
Community content is available under CC-BY-SA unless otherwise noted.